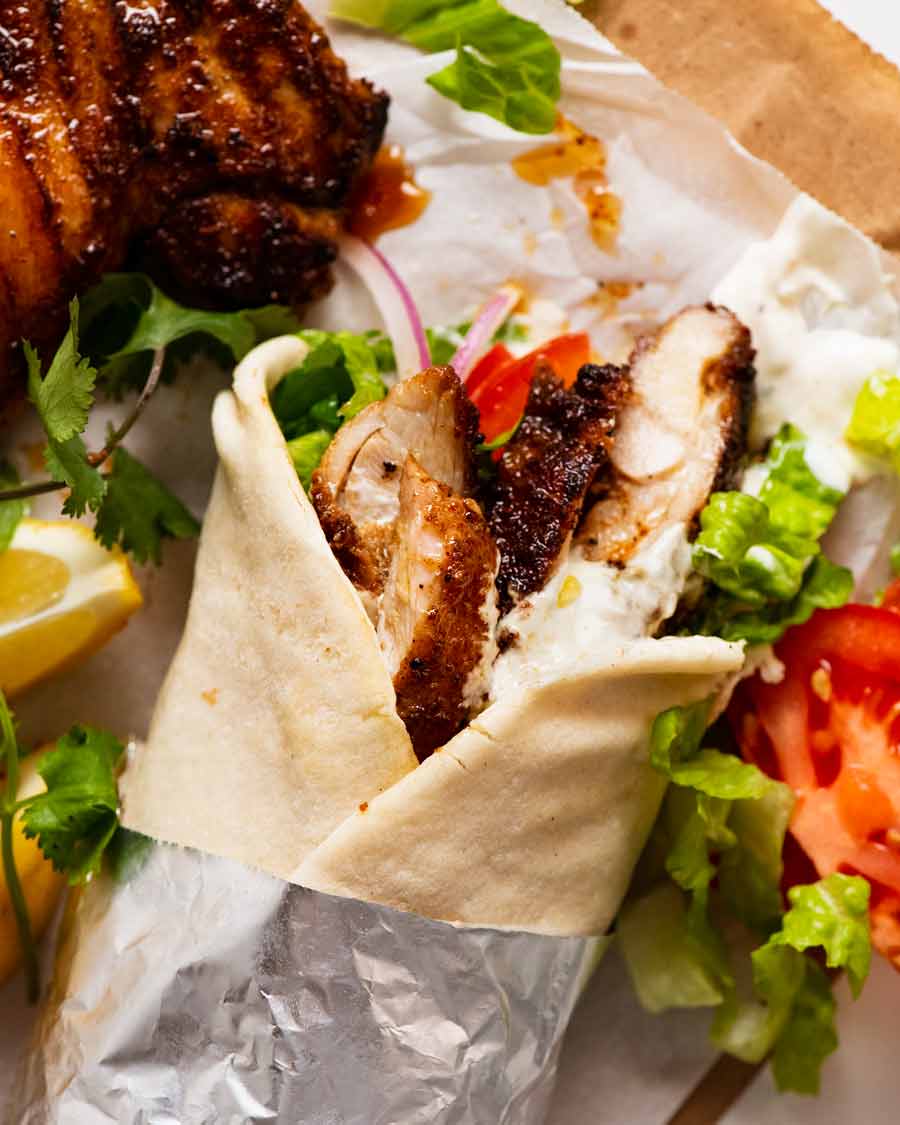 This Chicken Shawarma recipe is going to knock your socks off! Just a handful of every day spices makes an incredible Chicken Shawarma marinade that infuses the chicken with exotic Middle Eastern flavours. The smell when this is cooking is insane!

This is one of my signature recipes that will be very familiar to all my friends because I make this so often. It’s off the charts for effort vs output: just a handful of everyday spices, garlic, a splash of lemon and olive oil transforms into the most incredible flavour.

When this chicken is cooking, the smell is incredible. In fact, it’s how I met most of my neighbours when I lived in a townhouse complex, random people I had never met before popping their head over the fence wanting to know what on earth I was making. They were elated when I handed out samples!

What is Chicken Shawarma, actually??

Shawarma is a popular dish originating from the Middle East. It’s a popular street food that is traditionally made in the form of spiced meats that are stacked on a vertical rotisserie with thin slices shaved off as it rotates. But don’t worry! We can cook our horizontally in a good old pan or on the BBQ!

Shawarma was traditionally made with lamb, mutton and chicken though these days you see it with beef too. It’s commonly served in the form of a wrap, though in some countries you see it served on plates with sides such as seasoned rice or fries, and salads. In this recipe, I’m giving you both options!

Here’s what you need to make Chicken Shawarma. I’m betting you have most if not all of the spices in your pantry already!

Shawarma is traditionally served with either a tahini sauce (common in Israel) or a Yogurt Sauce. If you’d like to use a tahini sauce, use the one in this Roasted Broccolini recipe.

For a Lemon Yogurt Sauce, here’s what you need:

How to make Chicken Shawarma

For the best results, it’s best to marinate the chicken overnight. But to be honest, the volume and flavour of the marinade is intense enough that you can get away with a minimum of 3 hours of marinating. Been there, done that plenty of times, and nobody has complained!

How to Serve Chicken Shawarma

There are two main ways to serve Chicken Shawarma.

A few other things that would be very much at home alongside Chicken Shawarma:

The spread below features the Chickpea Salad referred to above and Mejadra, the lentil spiced rice.

This Chicken Shawarma, along with the Vietnamese Noodles with Lemongrass Chicken, are two of my most frequently made foods when I’m cooking for a crowd because it’s easy to make loads, they are both great “lay it all out and let everyone serve themselves” type foods (I’m a big fan of food like that), and it travels well. I’ve made this multiple times on camping trips (along with the Vietnamese Noodles and Greek Gyros!).

It was also part of a 7 course Arabian Feast menu that I shared way back when I first published this recipe in 2015. I still haven’t gotten around to perking up all the recipes with fresh new photos, but I will one day! I love that menu because so much of it can be prepared ahead, and there’s lots of common ingredients.

Be prepared for the amazing smells when you’re cooking this Chicken Shawarma! – Nagi xx

Chicken Shawarma recipe video! You can almost smell the heady aroma through the screen….almost!!! 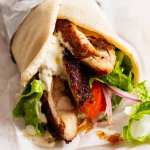 Recipe video above. The smell when this is cooking is outrageous! The marinade is very quick to prepare and the chicken can be frozen in the marinade, then defrosted prior to cooking. Best cooked on the outdoor grill / BBQ, but I usually make it on the stove.

Serve with Yogurt Sauce (provided) or the Tahini sauce in this recipe. Add a simple salad and flatbread laid out on a large platter, then let everyone make their own wraps!

1. MAKE AHEAD: Pop the marinade and chicken in a ziplock bag and freeze straight away. Then as it defrosts, it will marinate!

This also works well made ahead, which I recently did when I made this for 50 people as part of a multi-course meal. I grilled it in the morning and cut it up. Then prior to serving it was just heated up in the microwave. Toss it with the juices pooled at the bottom of the dish and no one will guess it was cooked earlier in the day!

2. Chicken per serving – If using large lebanese bread as pictured (diameter is almost 30cm/1 foot), you need around 300g/10oz of chicken per person (raw) to fully fill them out without tucking the ends in. 200 – 250g/7 – 8oz per person seems to be enough on average, but I always end up providing more!

Chicken breast: I feel strongly that this is best made with thigh because it’s got more fat so you get beautiful caramelisation. But it’s still super tasty made with chicken breast. The best way is to cut them in half horizontally to make 2 thin steaks no thicker than 1 cm/ 2/5″ each. If needed, pound lightly. Marinate per recipe. Then cook on a high heat (not medium high per recipe) for just 2 minutes on each side until golden. They will be juicy and beautiful inside!

4. Suggestions for things to make on the side:

Also see 7 Course Arabian Feast (summary below recipe) and above recipe card in post for lengthier list of side options.

5. BAKING: Cooking on a BBQ or stove is best to get the caramelisation. Baking doesn’t yield quite the same flavour – but still very good! Bake at 425F/220C for 20 – 25 minutes until a browned.

6. Nutrition for chicken only because flatbreads vary so much in size and calories.Assuming 6 servings.

Here is a summary of the Arabian Feast Menu that I shared back in 2015. I haven’t updated all the recipes yet – I’ll get to them eventually!

For the Men to Grill: Lamb Koftas, Chicken Shawarma (this recipe)

Because we must have Greens: Shredded Red Cabbage Carrot Salad, Spiced Chickpea Salad

Throwback to Life of Dozer in 2015 when I first published this recipe – nothing has changed in the years that has passed!

This shot pretty much encompasses how utterly predictable Dozer is:

Skulking near a big pile of meat

Squeezing himself under a tiny table laden with said food

Eyes sparkling at the possibilities

Licking his lips in anticipation

These tasty noodles might be simple but I make them a LOT! Perfect for all those times you’re scrambling for a quick side dish...

Enjoy your cooking experience with style and simple tecniques that assist you to be healthy and love live!Too many cooks..... Learn how to...

Make it a date

Enjoy your cooking experience with style and simple tecniques that assist you to be healthy and love live!When looking for healthy try a...